skip to main | skip to sidebar

Geography
Turkey is at the northeast end of the Mediterranean Sea in southeast Europe and southwest Asia. To the north is the Black Sea and to the west is the Aegean Sea. Its neighbours are Greece and Bulgaria to the west, Russia, Ukraine, and Romania to the north and northwest (through the Black Sea), Georgia, Armenia, Azerbaijan, and Iran to the east, and Syria and Iraq to the south. The Dardanelles, the Sea of Marmara, and the Bosporus divide the country. Turkey in Europe comprises an area about equal to the state of Massachusetts. Turkey in Asia is about the size of Texas. Its center is a treeless plateau rimmed by mountains.

History
Anatolia (Turkey in Asia) was occupied in about 1900 B.C. by the Indo-European Hittites and, after the Hittite empire's collapse in 1200 B.C. , by Phrygians and Lydian’s. The Persian Empire occupied the area in the 6th century B.C. , giving way to the Roman Empire, then later the Byzantine Empire. The Ottoman Turks first appeared in the early 13th century, subjugating Turkish and Mongol bands pressing against the eastern borders of Byzantium and making the Christian Balkan states their vassals. They gradually spread through the Near East and Balkans, capturing Constantinople in 1453 and storming the gates of Vienna two centuries later. At its height, the Ottoman Empire stretched from the Persian Gulf to western Algeria. Lasting for 600 years, the Ottoman Empire was not only one of the most powerful empires in the history of the Mediterranean region, but it generated a great cultural outpouring of Islamic art, architecture, and literature.
After the reign of Sultan Suleiman I the Magnificent (1494–1566), the Ottoman Empire began to decline politically, administratively, and economically. By the 18th century, Russia was seeking to establish itself as the protector of Christians in Turkey's Balkan territories. Russian ambitions were checked by Britain and France in the Crimean War (1854–1856), but the Russo-Turkish War (1877–1878) gave Bulgaria virtual independence and Romania and Serbia liberation from their nominal allegiance to the sultan. Turkish weakness stimulated a revolt of young liberals known as the Young Turks in 1909. They forced Sultan Abdul Humid to grant a constitution and install a liberal government. However, reforms were no barrier to further defeats in a war with Italy (1911–1912) and the Balkan Wars (1912–1913). Turkey sided with Germany in World War I, and, as a result, lost territory at the conclusion of the war

Names of Turkey
The name of Turkey, Türkiye in the Turkish language, can be divided into two components: Türk, which means "strong" or "mighty" in Old Turkic and usually signifying the inhabitants of Turkey or a member of the Turkish or Turkic peoples, a later form of "Tu–kin", a name given by the Chinese to the people living south of the Altay Mountains of Central Asia as early as 177 BCE; and the abstract suffix –iye (derived from the Arabic suffix –iyya, but also associated with the Medieval Latin suffix –ia in Turchia.The territory of Turkey is more than 1,600 kilometers (1,000 mi) long and 800 km (500 mi) wide, with a roughly rectangular shape. Turkey's area, including lakes, occupies 783,562 square kilometers (300,948 sq mi), of which 755,688 square kilometers (291,773 sq mi) are in Southwest Asia and 23,764 square kilometers (9,174 sq mi) in Europe. Turkey is the world's 37th-largest country in terms of area. The country is encircled by seas on three sides: the Aegean Sea to the west, the Black Sea to the north and the Mediterranean Sea to the south. Turkey also contains the Sea of Marmara in the northwest.


The first recorded use of the term "Türk" or "Türük" as an autonym is contained in the Orkhon inscriptions of the Göktürks (Celestial Turks) of Central Asia (c. 8th century CE). The English word "Turkey" is derived from the Medieval Latin Turchia (c. 1369).


Bosphorus Bridge in Istanbul, connecting Europe (left) and Asia (right)
Turkey is a transcontinental Eurasian country. Asian Turkey (made up largely of Anatolia), which includes 97% of the country, is separated from European Turkey by the Bosphorus, the Sea of Marmara, and the Dardanelles (which together form a water link between the Black Sea and the Mediterranean Sea). European Turkey (eastern Thrace or Rumelia in the Balkan Peninsula) comprises 3% of the country.

The European section of Turkey, Eastern Thrace, forms the borders of Turkey with Greece and Bulgaria. The Asian part of the country, Anatolia, consists of a high central plateau with narrow coastal plains, between the Köroğlu and Pontic mountain ranges to the north and the Taurus Mountains to the south. Eastern Turkey has a more mountainous landscape and is home to the sources of rivers such as the Euphrates, Tigris and Aras, and contains Lake Van and Mount Ararat, Turkey's highest point at 5,165 meters (16,946 ft).

Turkey's varied landscapes are the product of complex earth movements that have shaped the region over thousands of years and still manifest themselves in fairly frequent earthquakes and occasional volcanic eruptions. The Bosporus and the Dardanelles owe their existence to the fault lines running through Turkey that led to the creation of the Black Sea. There is an earthquake fault line across the north of the country from west to east, which caused a major earthquake in 1999.

Conditions can be much harsher in the more arid interior. Mountains close to the coast prevent Mediterranean influences from extending inland, giving the central Anatolian plateau of the interior of Turkey a continental climate with sharply contrasting seasons.
Winters on the plateau are especially severe. Temperatures of −30 °C to −40 °C (−22 °F to −40 °F) can occur in eastern Anatolia, and snow may lie on the ground at least 120 days of the year. In the west, winter temperatures average below 1 °C (34 °F). Summers are hot and dry, with temperatures generally above 30 °C (86 °F) in the day. Annual precipitation averages about 400 millimeters (15 in), with actual amounts determined by elevation. The driest regions are the Konya plain and the Malatya plain, where annual rainfall frequently is less than 300 millimeters (12 in). May is generally the wettest

Turkish cuisine is largely the heritage of Ottoman cuisine, which can be described as a fusion and refinement of Central Asian, Middle Eastern, Mediterranean, Caucasian and Balkan cuisines. Turkish cuisine has in turn influenced those and other neighboring cuisines, including that of Western Europe. The Ottomans fused various culinary traditions of their realm with influences from Middle Eastern cuisines, along with traditional Turkic elements from Central Asia (such as yogurt), creating a vast array of specialties- many with strong regional associations.
Taken as a whole, Turkish cuisine is not homogeneous. Aside from common Turkish specialties that can be found throughout the country, there are also many region-specific specialties. The Black Sea region's cuisine (northern Turkey) is based on corn and anchovies. The southeast—Urfa, Gaziantep and Adana—is famous for its kebabs, mezes and dough-based desserts such as baklava, kadayıf and künefe. Especially in the western parts of Turkey, where olive trees are grown abundantly, olive oil is the major type of oil used for cooking. The cuisines of the Aegean, Marmara and Mediterranean regions display basic characteristics of Mediterranean cuisine as they are rich in vegetables, herbs, and fish. Central Anatolia is famous for its pasta specialties, such as keşkek (kashkak), mantı (especially from Kayseri) and gözleme.

A specialty's name sometimes includes that of a city or region, either in or outside of Turkey, and may refer to the specific technique or ingredients used in that area. For example, the difference between Urfa kebab and Adana kebab is the use of garlic instead of onion and the larger amount of hot pepper that kebab contains.

Börek (also burek, brik, piroq and other variants) is a family of baked or fried filled pastries made of thin flaky dough known as yufka (or phyllo). It can be filled with cheese, often feta, sirene or kaşar, minced meat, or vegetables. Invented in Central Asia by nomadic Turks, it became a popular element of Ottoman cuisine.


A börek may be prepared in a large pan and cut into portions after baking, or as individual pastries. The top of the börek is often sprinkled with sesame seeds.


Börek is very popular in the cuisines of the former Ottoman Empire including The Northern Slavic cuisines, historically living in close contact with the Turkic peoples of Asia and Europe, also feature derivatives of the börek


Walima challenge for May is homemade Yufka or phyllo pastry if you really have the patient for it, beside the ingredients you need a very thin and long rolling pin to help you stretch the dough as thinly as possible… If you don’t have one, I think the best alternative is the hardware store, where they sell woods, you can find something there….. a thin post or something, get it unvarnished or painted bring it home wash dry quickly and then with a towel rub olive oil all over it couple of times to seal it…. And let it dry for a week or so before using…

By all means you can look for a Turkish store to buy the ready made Yufka….and use your imagination with the stuffing either for savoury or sweet which is the same dough they make home made baklawa…. Check this site for step by step preparation http://nihalcrossroads.blogspot.com/2009/11/making-yufka.html

These are ready made, very thin, big and round sheets of dough used for various kinds of pastries (börek), baked of fried. If you have to prepare the dough yourself for some of the Turkish recipes, you’ll need an 80 cm long rolling pin as thin as a finger (oklava). This is the only way to roll about paper thin sheets of dough for the famous flaky pastries. But it takes a certain experience to obtain the desired thinness. 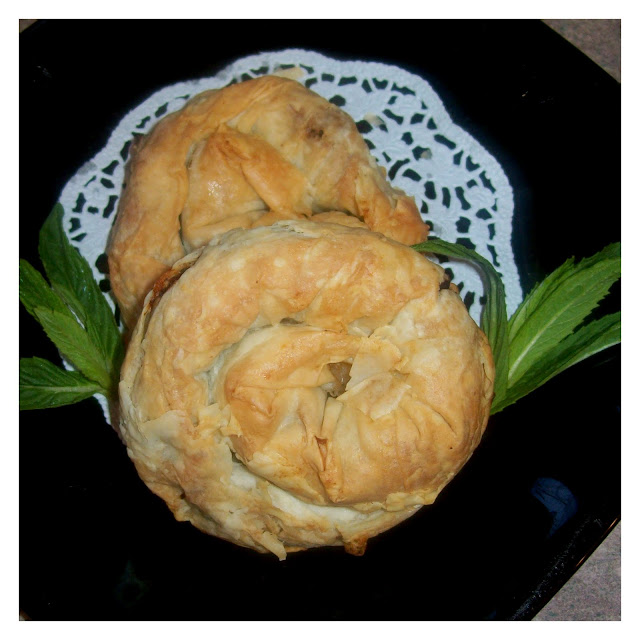 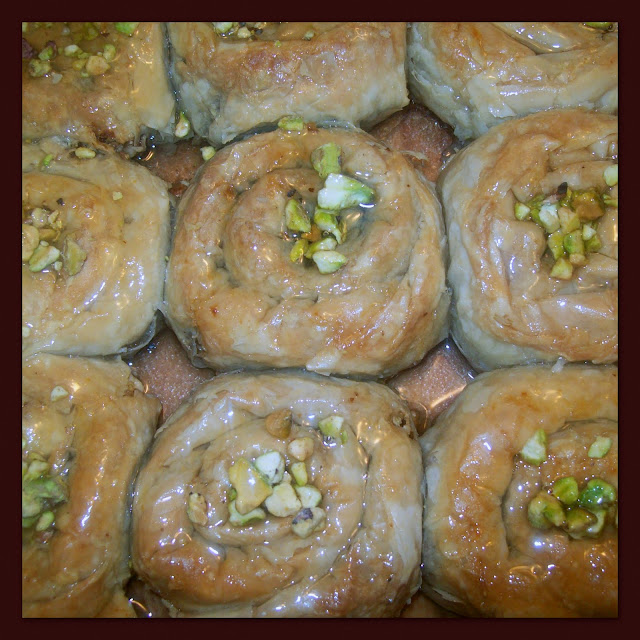 NightingaleNests
Posted by Arlette at 12:09 PM